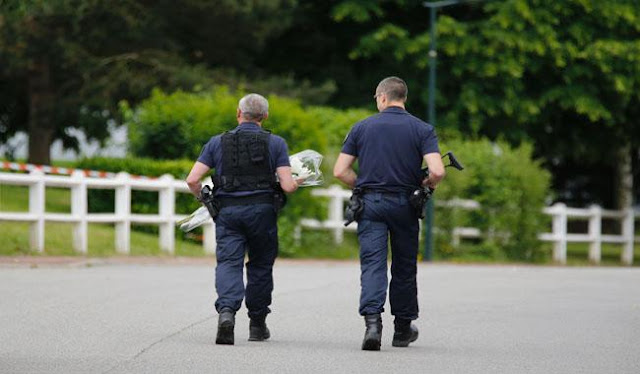 A police commander and his partner, who also worked for the police, were stabbed to death outside their home by a Frenchman who had pledged his allegiance to the Islamic State. The government denounced this act as an ‘abject act of terrorism’. 25-year-old Larossi Abballa also took the three-year-old son of the couple hostage in the attack he carried out on Monday night. The house was stormed by police commandos where they killed the attacker, but found the boy safe and unharmed, in a state of shock. Abballa was of Moroccan origin and was born in France. In 2013, he had been jailed because he had helped Islamist militants in going to Pakistan.

Francois Molins, the Paris prosecutor said that he had been under security surveillance at the time of the attack, which included wiretaps. While speaking at a news conferences, Molins said that during the siege, Abballa told police negotiators that he was answering an appeal made by Abu Bakr al-Baghdadi, the chief of the Iraq-based Islamic state, who had asked to ‘kill infidels at home with their families’. The prosecutor said that the attacker had admitted to being a practicing Muslim who was observing Ramadan and had pledged allegiance to Abu Bakr al-Baghdadi three weeks ago.

Molins said that a bloodied knife was found at the scene by the police, along with a list of possible targets, which included journalists, rap musicians and police officers. Since the Paris massacre conducted by Islamic State gunmen that occurred in November last year and claimed the lives of 130 people, France has been in a state of emergency and its security was high alert for the Euro 2016 soccer tournament that had begun the previous Friday. Abballa posted a video on social networks that linked the attack to the soccer championship and had said that the Euros was going to be a graveyard.

On Tuesday, the video was removed from Facebook. A Facebook spokesman based in Paris, Michelle Gilbert, said that hate messages were forbidden as per the company’s guidelines and such content is removed swiftly from the website when they are alerted. On Monday evening, the killer repeatedly knifed the police commander, 42-year-old Jean Baptiste Salvaing, in the stomach. He then barricaded himself in the commander’s house in Magnanville with the commander’s partner and son. 36-year-old Jessica Schneider was a secretary at a police station in a suburb nearby and was also killed with a knife.

The attack was claimed by the Islamic State. This is the first militant strike to be made on French soil after last November when there were multiple attacks on restaurants, bars, the national soccer stadium and a concern hall in Paris. Bernard Canzeneuve, the Interior Minister, called the incident an abject act of terrorism. Francois Hollande, the President, said that this was undoubtedly a terrorist act and that there were high terrorist threats in France. Abballa’s home was searched by the police on Tuesday, along with other locations. They also detained three people who were reportedly close to Abballa for questioning.